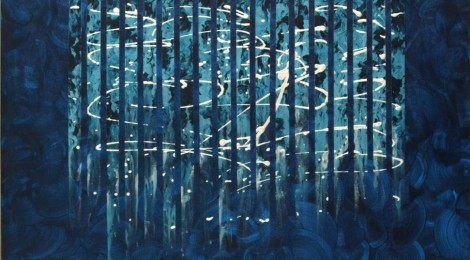 Einat Maor have been practicing professional art for almost two decades. For the past ten years she has been mainly focusing on painting using mainly acrylics. Einat is working in her own personal style, which combines abstract with a touch of graphic influence.

Einat studied graphic design at the Israel Institute of Technology (the Technion) during 1988-1990 as well as traditional Chinese painting and calligraphy, at the Taipei Fine Art Museum (1994-5).

Since the beginning of the Nineties, Einat spent much of her time living in Asia –  Starting with Katmandu (1991-1994), moving to Taipei (1994-1996), and later on to the metropolis of Shanghai (2001-2005), with her work being enriched by the culture, art, spirit, people and colors of each one the different and unique places.

The Chinese influence can easily be noticed in her recent works, with the increased use of “Chinese” colors (mainly red & gold) as well as the interesting integration between Chinese motives and the abstract style, reflecting the spirits of Asia and portraying the connection between east and west.

In the recent years Einat has developed its photographic art and have been creating new photographic are works, presenting her personal and unique vision of reality.

During the years 2004-2012, Einat’s works have been exhibited in about fifty solo and group exhibitions in Paris (France), London (UK), Vancouver & Montreal (Canada), Vienna (Austria), Shanghai & Nanjing (China), Cluj (Romania), as well as Tel Aviv, Jerusalem, Haifa, and more than 10 other cities in Israel.

A number of them can be found in private collections around the world, including Israel, UK, China, USA, Switzerland, and Malaysia.

Einat is a member of the Professional Union of Visual Artists in Israel (Impact), the Free Union of Painters & Sculptors, and the Netanya Artist’s Association.

Einat Maor is a rationalist artist who very successfully crossed the lines between the graphic arts and painting and artwork. Influenced by her long stay in China, Einat combines the East and the West in her diversified liner of works.  The Chinese effect can be seen in the colors she works with: bright red and gold. In her “white” line of works the artist has expended the term “white”. In Einat’s white many colorations and infinity of shapes. Her paintings are a harmony of abstract shapes, color, and composition. Recommended! I was very impressed!

Einat Maor displays painting in art deco. She is currently involved in developing a painting concept based on a flat bi-dimension and shows very impressive perspective and artistic depth in her works. Maor is committed to accuracy based on conscious observation in her painting, something that is a unique challenge for her. She has a very specific and personal as well as very creative artistic vocabulary – typical only to her.

Maor’s works are often seems as if they are fixed in the space, as pieces or strips attached to the canvas, creating a texture which can be absorbed in emotional and rationalistic view.

The encounter of the viewer with Einat Maor’s art works is a unique and joyful visual experience. Her works offer a fantastic or personal world model, much as the result of the effects of various cultures and art streams she absorbed while staying for years in Asia – Nepal, Taiwan and China.

Maor, born in Israel, is painting in acrylic on canvas and other platforms, in her style which integrates abstract with graphic lines and accents.

Especially prominent is the use of the “Chinese” colors red and gold which are integrated in the abstract style which reflects original ideas of Einat, who is combining the Eastern and Western cultures both in her paintings.

During the years 2004-2012, Einat’s works have been exhibited in about fifty solo and group exhibitions in Paris (France), London (UK), Vancouver & Montreal (Canada), Vienna (Austria), Shanghai & Nanjing (China), Cluj (Romania), as well as Tel Aviv, Jerusalem, Haifa, and more than 10 other cities in Israel.